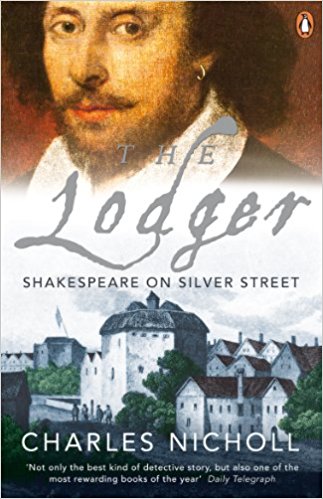 Esther Cawte, French and German graduate from UCL and one of our volunteers, writes about the Book Club’s June read ‘The Lodger’ by Charles Nicholl.

In May, we read Charles Nicholl’s The Lodger: Shakespeare on Silver Street, as several visitors to the museum had recommended it.

The starting point of the book is in 1612, when William Shakespeare appeared in the Court of Requests at Westminster to give evidence in a case involving the Mountjoy family with whom he lodged between 1602 and 1604. The Mountjoys were Huguenots, having moved from France and set up their home and business of ‘tiremaking’ (making decorative headwear) in Silver Street.

The court case was a family dispute; Stephen Belott alleged that Christopher Mountjoy, his father-in-law, had promised a dowry of £60 (equivalent to about £12,000 today) when he married his daughter, Mary. Shakespeare is called as a witness, having played an important role in their betrothal and having allegedly witnessed Mountjoys’ promise. In his deposition, Shakespeare claims that the dowry was indeed promised, the amount of which he does not however remember.

After his account of the court case, Nicholl explores the context and details of this story. He maps out Elizabethan London, tracing the evolution of the streets surrounding Silver Street, through the ages until the present day, We really enjoyed seeing the maps of how Silver Street changed, and comparing it with maps from today – the house where Shakespeare lodged no longer exists, and if you were to visit the spot today, you would be standing in an underground car-park.

After remapping London, Nicholl provides fascinating details about the life which filled the streets; he explores the Mountjoys’ trade of tiremaking, fashion, and its implications with the family’s social connections. On the one hand, they enjoyed royal approval; Christopher Mountjoy’s skills of tiremaking drew the attraction of Queen Anne, who purchased some of his creations in 1604. On the other hand, they faced the challenges of being ‘strangers’ in London. After fleeing France as refugees and resettling in London, the Mountjoys’ established a successful business like many other Huguenots, which caused resentment and anti-immigration sentiment among other Londoners, who accused the immigrants of threatening their trade and refusing to integrate.

We were particularly interested in Nicholl’s presentation of Shakespeare’s relationship with foreigners. He makes an interesting and convincing case for Shakespeare’s sympathy towards strangers, using examples from Shakespeare’s plays and sonnets to show how he challenged the prejudices against foreigners during a time of widespread xenophobia and anti-immigration riots. It is also interesting to note that none of Shakespeare’s plays are set in Elizabethan or Jacobean England, therefore any spectator of his plays would engage on some level with a ‘foreignness’, even if only nominally. Furthermore, Nicholl speculates about Shakespeare’s ideas of beauty, again using textual analysis of his plays to suggest how Shakespeare related beauty, darkness and foreignness to each other.

With limited details about Shakespeare, the Mountjoy family, their acquaintances and the lives they led, Nicholl admits often that many of his links are probabilities, rather than certainties. For example, the only information provided in the court case about the relationship between Marie Mountjoy (Christopher Mountjoy’s wife) and Shakespeare is that she is his landlady. Yet Nicholl, after exploring Jacobean prostitution, marriage customs, bawdiness and attitudes towards sex, speculates that their relationship may have been not as it initially seemed. This could never be proved by any evidence, but the speculation and unanswerable question marks are intriguing.

In all, we enjoyed reading this work by Nicholl. Its approach is quiet different to many other books, being in part a detective enquiry, and in part a vivid, extraordinarily detailed depiction of the Jacobean life of Shakespeare and one particular Huguenot family.

To continue with our theme of Shakespeare, our next book will be Love’s Labours Lost. The Bard sets the story in Huguenot King Henry of Navarre’s court, bringing to life themes of intrigue, adultery, and loyalty. For more information, see our event.