Huguenot Gowns Past and Present 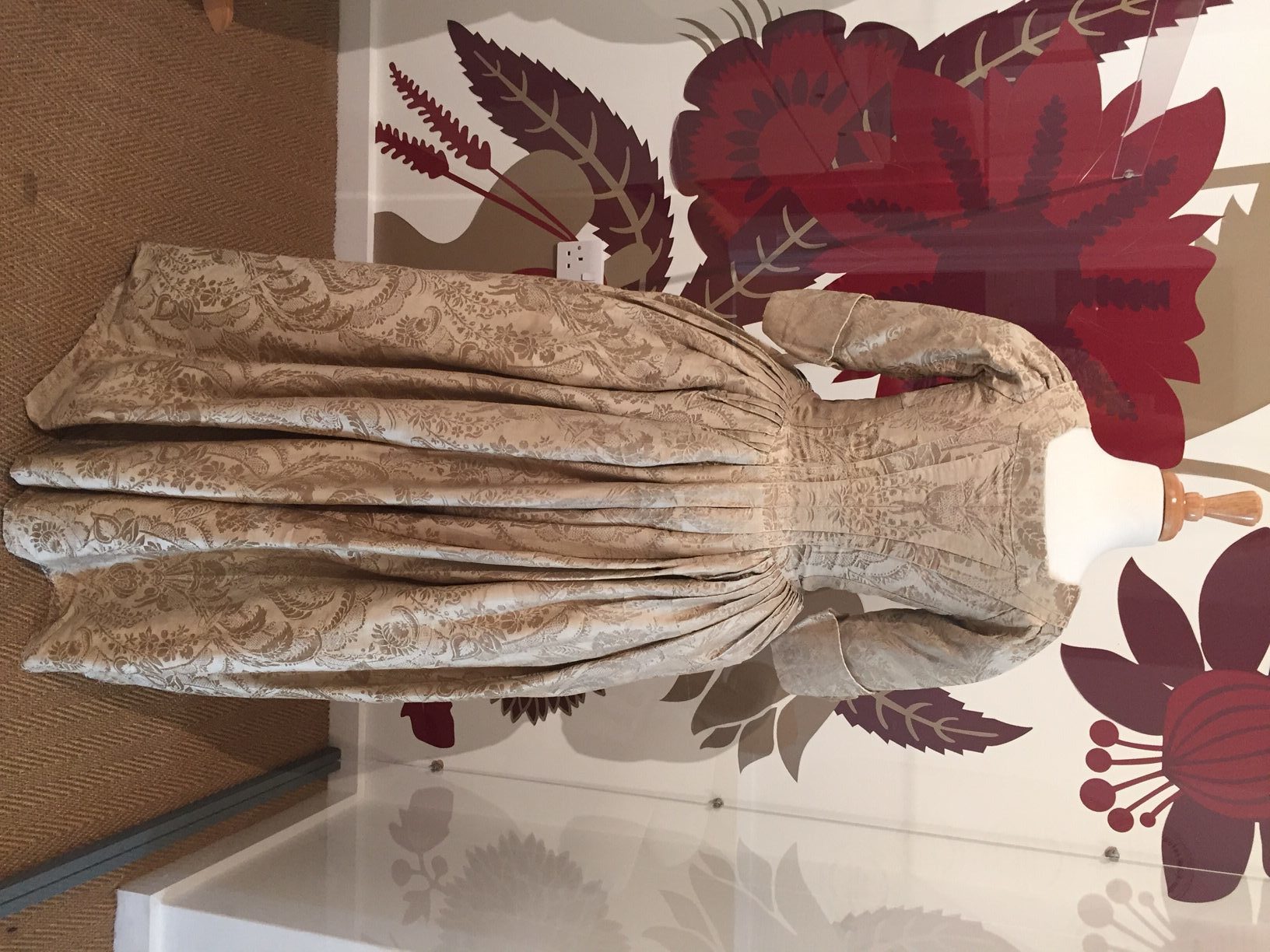 On 21 May, costume collector and historian Lee Ault delivered a fascinating talk on the history of dress at the Huguenot Museum. Lee’s amazing collection of historic costume formed the basis of this walk through dress history. Lee’s talk was inspired by one of her own precious heirlooms, a silk dress of brocaded damask, woven in Canterbury in around 1724. This gown features in the Museum’s current display Huguenot Silk: Canterbury and Catwalk. Lee inherited the dress from her Huguenot ancestors, LeFevres, from the weaving city of Canterbury. Lee recalls being taken to the Huguenot Chapel in the crypt of Canterbury Cathedral as a girl, their Huguenot ancestry still recalled by the family generations later.

We know that the silk used for this dress dates from the period around 1724 because that was the era when the naturalistic and lace patterns used in the design of this silk were at the height of style. In 1729, the paper artist Mrs Delany, writes of buying French silks with ‘a running pattern like lace in the ground’. Ault’s silk with its design of naturalistic fruit and flowers adjacent to lace detailing and scrolls is typical of the period and Delaney’s description. Gold and silver thread were popular choices at the time too and the use of metal thread could double the price of the silk.

Lee’s dress arrived at the Museum with a box of fabric – pieces of silk which had been cut way from the gown. We spoke to curators at the V&A to try and piece the dress’s story back together. The dress has undergone quite some remodelling to update it to suit the latest fashions of the 1770s. The dress was probably originally constructed in the 1750s when fashion dictated wide skirts worn over a square hoop. The pleating on the dress can be dated to this period too, and a looser gown, possibly with a sack back, would have been stitched down to create this look.

Lee’s dress is proudly displayed next to one of the looks from the current Alexander McQueen collection, the creations of head designer, Sarah Burton. McQueen’s Spring/Summer 16 collection takes the Huguenot legacy as its inspiration, in particular the silk weavers of Spitalfields, the products they made and the clothes they wore. The dress on display is of silk velvet embroidered with flowers using fil coupe techniques, inspired by the frockcoats of Huguenot weavers. Other dresses in the same collection use printed naturalistic flowers beloved of the designer Anna Maria Garthwaite, an eighteenth century English silk designer who worked with the most successful Huguenots weavers to realise her designs in silks of the highest quality. This collection is especially potent given Sarah Burton’s close relationship with Alexander ‘Lee’ McQueen. She joined the house the year the designer showed his eighth collection in Christ Church Spitalfields. Like the Scottish ancestry that inspired several of his collections, McQueen also drew inspiration from Huguenot heritage too, and the legacy of one of his ancestors, Sarah Vallas, who he believed was of Huguenot descent. Sarah Burton has described the collection as precious heirlooms, ‘artefacts of the hand’ which draw on a legacy of craftsmanship. Here at the Museum, the dress joins our collection of historic silver, jewellery, silks, clocks and watches of Huguenot workmanship on display, and just such a legacy.