The Story of an Exhibition: Beginning the Research for Canterbury & Catwalk 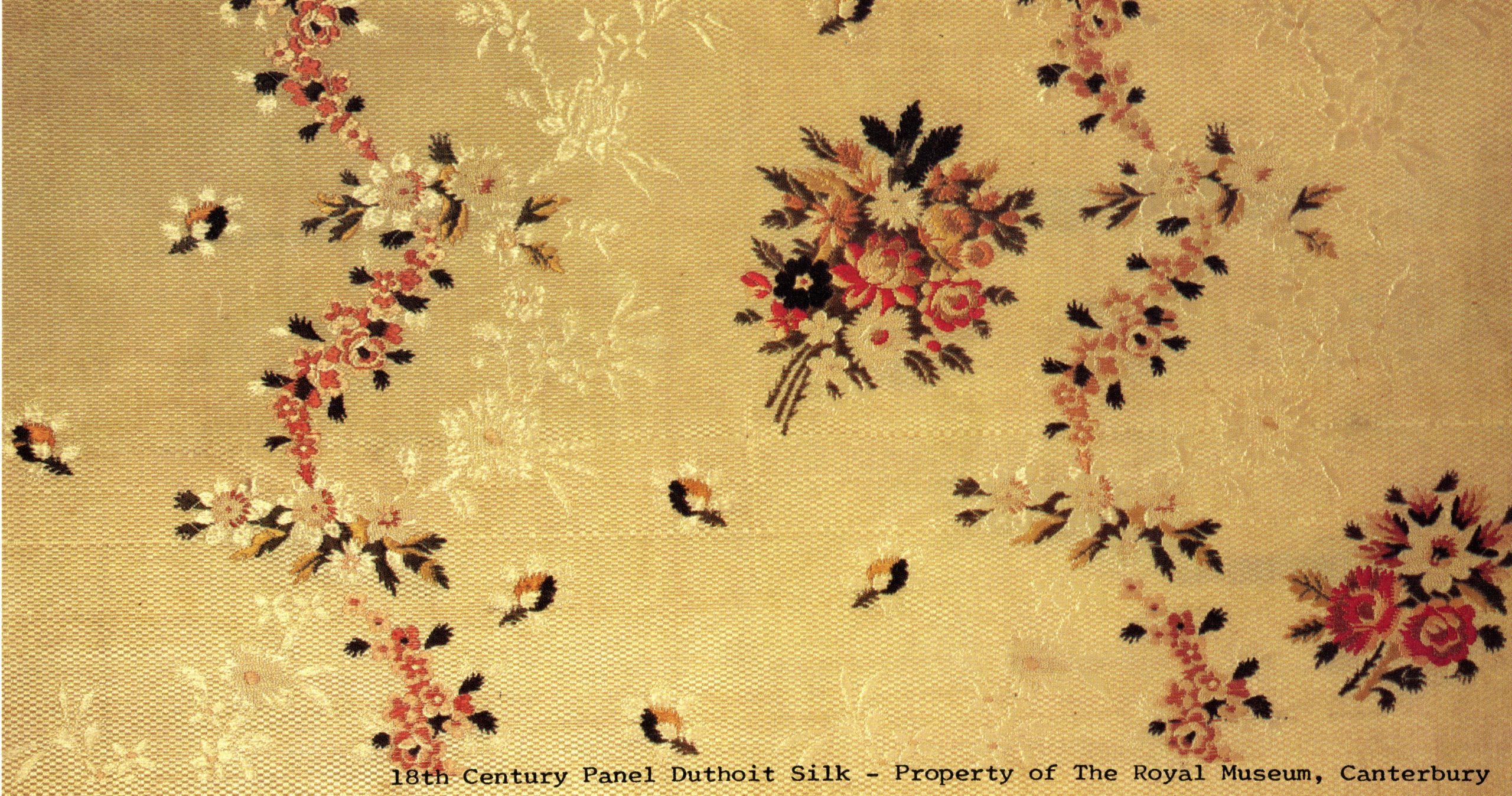 Emily Fuggle, Museum director and curator of our current display Huguenot Silk: Canterbury and Catwalk talks about starting the research for this exhibition:

In the 1870s Jonathan Duthoit, who was a director at the French Hospital, donated several items to the hospital. One of these was a firescreen, paneled with eighteenth-century silk from his family’s prosperous silk weaving business in Gresham Street. The piece was originally designed for a wedding dress and was the kind of silk typical of Huguenot manufacture and skills. Since then, this silkscreen has been part of the furnishings of the French Hospital, enjoyed by the directors who govern the institution and ensure its survival as almshouses for today’s 60 residents. The Duthoit firescreen, as one of the few silks we currently look after at the Huguenot Museum, prompted me to probe a bit further into the Duthoit family story. The Duthoits were a silkweaving family originating in Lille, and we find records of them right back to 1610, weaving in Canterbury. As someone new to Kent, I learnt that French Protestants had been weaving silks and wools in Canterbury since 1570. By 1675, it’s been estimated that up to one third of Canterbury’s population were Huguenot weavers employed in the weaving industries. A huge number…

One of the Duthoit number was James. James’s will of 1676 identifies him as one of the city’s wealthier weavers. His estate was valued at over £1854 when he died, with striped silks in the hands of London merchants, among his possessions, and London merchants themselves among his debtors. The family had started to make their fortune through their links to the capital, weaving in Canterbury yet selling in London. We’re lucky to know all this from a number of wills surviving from the city which tell us the state of the weaving business. The wealthiest weavers in Canterbury could have up to two workshops and up to twelve looms.

Henry Duthoit (b. 1733) was the last to stay in Canterbury. By then, the family had packed up for London’s Gresham Street to seek the family’s fortunes. Another branch made their way to Spitalfields (on what is now Princelet Street) and another to Brick Lane. In our search for the Duthoit story, we tracked down the fragment of their silk still in the collections of Canterbury Museums. This broadened out our understanding of the fate of the silk industry in the city. Examining the collections at Canterbury, we discovered a ring, and samples of silk, given to the museum several decades ago. Daniel Lepine was apprenticed to his father, also in the trade, in 1734. The Lepines sold their silks around the county of Kent, at markets and fairs such as at Maidstone where their goods for sale included ‘a very curious parcel of newest fashion brocade, broad damask, marille silks, rich borders and half tabbies’. By the time of Daniel’s entry into the trade though, silk manufacture in Canterbury was falling into decline. There perhaps weren’t the buyers in the county of Kent that London’s followers of fashion could supply. To add to the family’s misfortune, in 1810 the Lepine workshops burned down and Daniel died several years later, his daughter Hannah carrying a mourning ring for her father, which still survives. Hannah married and the family moved into other things. We found a trace of Hannah’s granddaughter back at the Museum. In 1905, Julia Welby appeared before those same directors of the French Hospital for a bursary – a bookfolder from Bethnal Green – she had fallen on hard times and needed the funds to subsist on. She was 65. These two family stories revealed the divergent fates of some of the Canterbury silkweavers of Huguenot descent, and the fortunes of the silk trade in Canterbury in the seventeenth and eighteenth centuries.

In starting to reveal the fate of many whose lives were touched by this industry, we were also led to a rare survival of a Canterbury silk damask, woven in 1724, which had been passed down through one family, called Lefevres. The next stage in our research began.

In our next post, we will reveal more about the dress. You can also hear more from costume collector, Lee Ault, at her talk at the Huguenot Museum on Saturday 21 May. Click here to book.