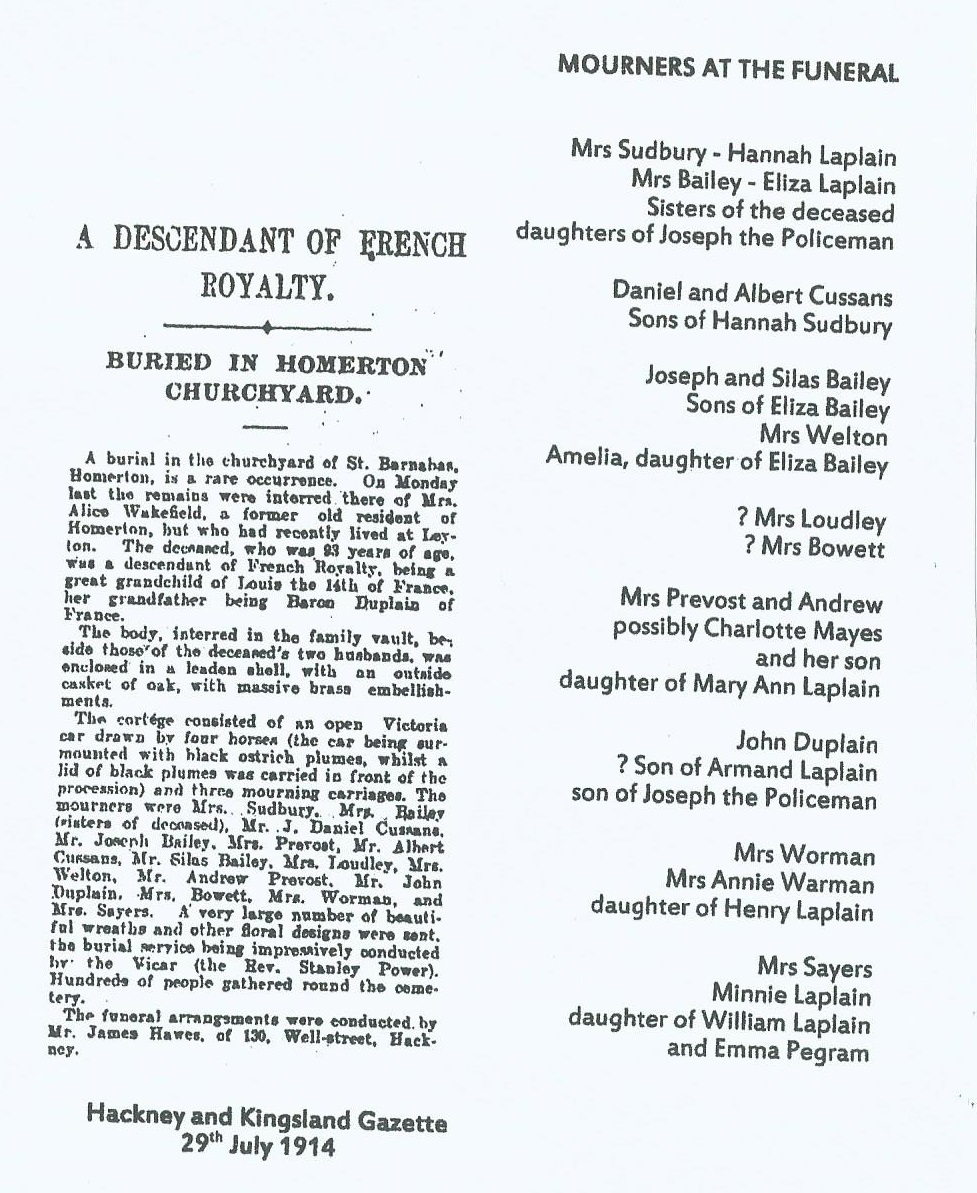 The article in the Hackney Gazette from 1914 relating to my Great-Great Aunt Alice? A wonderful notion, but yet to be proven!

We are very lucky to have such a wonderful group of volunteers at the Huguenot Museum who help with all aspects of our work from manning the reception desk to documenting our collections. Many of our volunteers have discovered that they are in fact Huguenot descendants themselves and our lovely volunteer Lesley Young tells us about the journey of discovery that changed her life.

This is how it happened. I first became aware that some research had been undertaken on my paternal family tree when I was about 5 or 6. My father came into the kitchen of our South London home one afternoon brandishing a scrap of paper on which was scrawled a short list of names and dates, and a tattered copy of a newspaper article from The Hackney Gazette dated 1914. ‘Look at this! We’ve got French Ancestry!’ He’d been presented with this information by a cousin of his called Thomas Wood which Thomas had accumulated over a period of time in the 1940s by sheer legwork. On reflection, I now marvel at the amount and accuracy of the information that he managed to discover in a time when ‘on-line’ referred to wet washing pegged onto a rope and strung out across the garden.

We were mildly interested, and thereafter the papers were stowed into a drawer where they stayed for many years. They re-surfaced when I proudly took them along to show my French Mistress at school. She was distinctly unimpressed.

During a house move about 6 years ago they were still nestled in a drawer, and I casually thrust them at a friend of mine called Lynn Shipton, who I think we will call an amateur genealogist (but should be professional), and asked, ‘Lynn, could you have a look at these for me?’

I am forever in her debt. Some months later she presented me with a heavy folder full of documents and said ‘Did you realise that you are a Huguenot descendant?’

With the help, enthusiasm and dedication of my daughter Frances (aptly named) we began our own investigations and we were soon plunged into an emotional roller coaster of discovery and amazement. Along the way we have discovered the fate of our original French Protestant ancestor Baron Paul de la Plaigne, who was in fact hereditary Greffier in the Royal Domain of Guyenne to Louis XIV, an important and trusted position. His son Joseph took over this role after Paul’s death. It seems that at some point Joseph abjured, converting to Catholicism. But regardless, in 1699 his property was confiscated and he was imprisoned in the formidable Castle de Loches from where he made an escape 2 years later, eventually fleeing to England. Having suffered a huge downturn in financial fortunes, he subsequently became acquainted with the 2nd Duke of Devonshire, and is is said to have tutored the Duke’s son at Chatsworth House. A wonderful story emerges from here. Joseph married at the age of 70 and his son, Guillaume, was baptised in the Savoy Chapel with the Duke as his Godfather. Guillaume, aka William, later became vicar of Wrackwardine (Allscot Vicarage). The fortunes of the de la Plaigne family ebbed and flowed over the years. We have been delighted to discover that we are so closely related to a renowned and delightful Shakespearean actor (the very one who recently featured in ‘Who Do You Think You Are?’) and a prominent and likeable Parliamentary MP, both of whom share our ancestry. We also discovered that a wonderful lady called Muriel Gibbs has written a book about the De La Plaignes, entitled ‘Not My Family’. She is currently researching another Huguenot family in her association with the East of London Family History Society. Frances and I will continue to dig and delve with enthusiasm in the knowledge that we have much to uncover, and have a marvellous story to present to my two grand-daughters and my great-niece. If only my Dad and Tommy Wood were here now. They would have been so chuffed to see how far we have come.

The Huguenot Museum has dedicated volunteer researchers who can assist with family history research to help you to discover your own Huguenot story! Contact the Museum on 01634 789347 or info@huguenotmuseum.org to find out more.